Episode spoiler warning: have the tissues handy because there will not be a dry eye in the house. There will be heartache and tears – buckets of tears, an unrelenting torrent of tears – no matter how many times you watch this episode.

Things continue to go from bad to worse for the Poldarks. Putrid throat has hit the district badly. Unlike “miner’s disease”, this one does not discriminate between rich or poor. Dwight is struggling to contain and treat his patients, knowing it is a losing battle, while Dr Choake believes it is nothing more than a mild case of sore throat. Trenwith has been overrun by the little bugger, all except for 93-year-old Aunt Agatha who has been around long enough to see six generations of Poldarks and shows no signs of letting up.

While Ross is away in town, working hard to avoid bankruptcy, Demelza decides to visit Trenwith to check on their cousins. She arrives to find Francis already bedridden and Elizabeth, herself looking worse for wear, nursing a sick Geoffrey Charles in his cot. No-one protests when Demelza offers to stay to look after them. Even Francis manages to mutter his thanks, grateful that she has the heart to overlook past grievances between them. END_OF_DOCUMENT_TOKEN_TO_BE_REPLACED

George Warleggan, with his smarts, money and spies everywhere, uncovers the backbone of the Carnmore Copper Company’s operations: the Tressider Mill. His first step to taking down Carnmore is simple – call in Tressider’s loans and threaten to put him out of business unless he ceases to work with Carnmore. Score one to George.

Despite their differences, Ross still trusts that Francis will keep his secret about Carnmore’s operations. But how long will this last? As it turns out, not long at all. Following the embarrassing confrontation at the Warleggan ball, Blamey and Verity agree to elope. When Francis finds Verity gone, he mistakenly assumes it is Ross who has been helping Verity rekindle her relationship with Blamey, having helped them once before.

Conveniently, just as this news is breaking, George is visiting Trenwith, telling Francis and Elizabeth that his cousin’s cheating is the reason they have lost Grambler and that he wishes to make amends by offering them a large compensation which effectively discharges his outstanding debts to the Warleggans. Needless to say, they are overjoyed (and not suspicious of his motives at all!).

END_OF_DOCUMENT_TOKEN_TO_BE_REPLACED

With Grambler now lost, Francis takes to farming his land, though with much less flair than his cousin Ross. Seeing hard labour as beneath him and seething with jealousy and bitterness, he wishes Ross luck at his first copper auction since the formation of his “secretive” Carnmore Copper Company.

Whilst Ross’ plan works and the Carnmore successfully wins its bids for copper against the Warleggans, suspicions arise as to the names behind this new company that nobody has heard of before. George immediately suspects that Ross has something to do with it.

Across the country, the economy continues to worsen. More mines are closing and people are rioting – for starvation makes ordinary, law-abiding people desperate.  Meanwhile, Jinny is counting the days till her husband, Jim, will come home from his two-year sentence. She has not heard from him in several weeks and rumours abound that Bodmin Gaol where Jim is kept is riddled with fever.

Concerned over Jim’s welfare, Ross and Dwight go to the gaol to check on him. Upon their arrival, it is clear that even the prison wardens are staying away from the prisoners who are dying from all sorts of diseases. They find Jim hallucinating and surely close to death and take him out of gaol. Jim’s arm is riddled with gangrene and Ross begs Dwight to amputate to save his life. Unfortunately, it is too late. END_OF_DOCUMENT_TOKEN_TO_BE_REPLACED 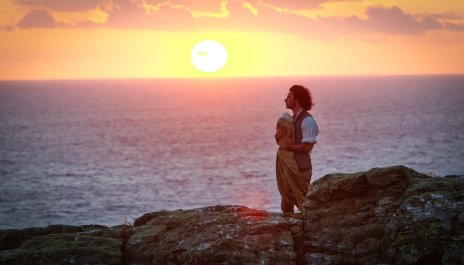 A new doctor arrives in Cornwall to the delight of Ross (and audiences). Dr Dwight Enys (Luke Norris) is the man responsible for patching up Ross during his time at war in America. He has arrived in town to study mine diseases, something which Dr Choake deems to be unworthy of his time. After all, those who suffer from such illnesses – the poor miners – cannot afford to pay him. “Isn’t the saving of a life payment enough?” Dwight asks. Apparently not. 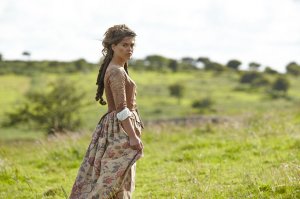 A travelling troupe also arrives in the district to provide some much-needed entertainment. Mark Daniel (Matthew Wilson), Ross’ old friend and right-hand man at the mine, is particularly smitten with one particular member of the troupe, an actress named Keren (Sabrina Bartlett). Their courtship is brief and they quickly marry. It is immediately obvious that Keren’s desire to marry Mark is driven more by her assumption he could provide for her than her desire for him. The way she frowned with disappointment at the sight of the small cottage that Mark has spruced up for her speaks volumes. The fact she is already flirting with Dwight at her own wedding feast foreshadows bad things to come for poor Mark. END_OF_DOCUMENT_TOKEN_TO_BE_REPLACED

Episode spoiler warning: Ross declares his love for Demelza in the most romantic way. 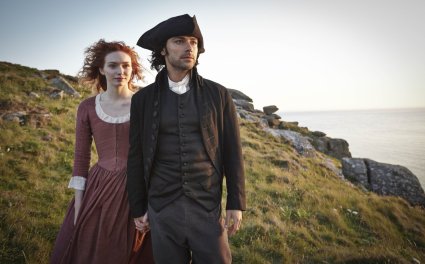 As the newlyweds settle back into their “new normal”, Demelza struggles with becoming the new lady-of-the-house. She hires Jinny as her own maid, at Ross’ urging, in an attempt to stop her continuing to behave like a servant.

Ross tells Francis that he has married Demelza and asks him to relay his happy news. Francis tells him that everyone in society will shun him but Ross, far from being put off by the prospect, welcomes the idea of never having to attend their society parties again.

While the news of the nuptials travels fast and everyone thinks Ross has finally lost his mind, Verity is happy for Ross. She is still nursing her own broken heart but is glad her dear cousin has found love, perhaps even given up on any further thoughts of Elizabeth. END_OF_DOCUMENT_TOKEN_TO_BE_REPLACED

Episode spoiler warning: Ross and Demelza finally give in to their feelings and turn rumours and innuendo into fact. Oh, and the infamous shirtless scything scene!

Wheal Leisure is finally open for business. Grambler, meanwhile, continues to struggle. Behind in paying their wages, miners begin to defect to work at Leisure instead. Elizabeth gives birth to a baby boy but Francis looks anything but happy. Elizabeth tells Ross she had hoped that he would be the baby’s godfather but Francis chose George, who never seems to be far from his side.

In the middle of his speech at the baby’s christening, Charles collapses from a heart attack. He tells a terrified Francis that he needs to step up and start paying more attention to the running of Grambler. As if Francis is not already jealous enough of his cousin, his own father tells him to take a look at how Ross is running his own mine – by rolling up his sleeves and working alongside his workers. This is how you earn their loyalty. END_OF_DOCUMENT_TOKEN_TO_BE_REPLACED