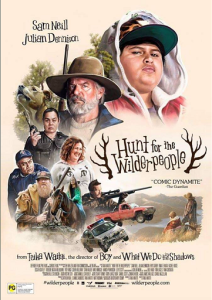 Here’s the thing: whenever I travel and people find out I am from Australia, these are some common questions and comments I get:

In contrast, our friends across the ditch seem to receive a much more pleasant reception: New Zealand is the beautiful Middle Earth, as made famous by her favourite son, Peter Jackson through his Lord of the Rings and The Hobbit trilogies. And now, taking over the mantle is another favourite son, Taika Waititi (Flight of the Conchords, What We Do In The Shadows and the upcoming Thor: Ragnarok).

Ricky Baker (Julian Dennison) is a troubled teen who, having been passed around the foster care system for years after various misdemeanours, finally settles with the Faulkners, Bella (Rima Te Wiata) and Hector (Sam Neill) who live in the middle of nowhere, surrounded by rolling hills, blue skies and leafy trees. Things are going well for young Ricky until tragedy strikes and Ricky decides to run away.But as we all must admit, city folk just don’t do well out in the bush and Ricky is going around in circles with no supplies and no idea. Needless to say, it does not take long before he is found by Hector.