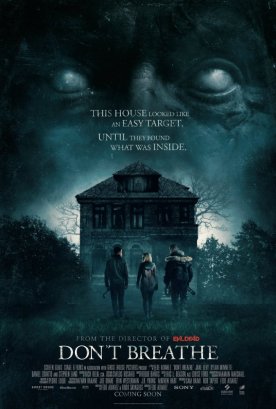 A trio of brazen young thieves in down-and-out Detroit help themselves to fancy stuff from rich folks’ houses while they are out of town. Technically, they are not breaking and entering because they are able to unlock front doors and disarm security alarms, thanks to the house keys and alarm override gadget from Alex (Dylan Minnette), whose father is a guard at the security firm supposedly protecting these houses.

Alex, along with cohorts “Money” (Daniel Zovatto) and Rocky (Jane Levy) seem to have only one rule: don’t take cash. Other than that, it’s a free-for-all. They don’t wear masks and Money even likes to leave a little something of himself behind which, you would have thought, leaves them wide open for DNA identification should they ever be caught. But I digress.

Not content with the pittance that they get from selling hot Rolexes and other luxury items, Money decides to break their rule. He gets a tip about an ex-army vet (Stephen Lang) who won a six-figure settlement from a wealthy family whose daughter had killed his daughter in a hit-and-run accident. Despite his windfall, the vet lives as a recluse in a neighbourhood long abandoned by everyone else. Money is convinced the cash is hidden inside the house – why else would he still be living in a run-down house and yet install a high-end security system? END_OF_DOCUMENT_TOKEN_TO_BE_REPLACED