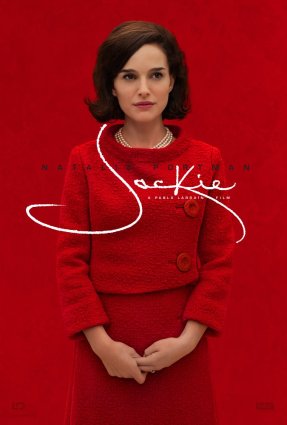 A great deal has been written about the assassination of President John F. Kennedy Jr on that fateful day in November of 1963. The image of his body slumped across his wife’s lap in the backseat of the convertible as the motorcade made its slow procession along the Dallas street has been imprinted in the world’s memory. History books, documentaries, TV shows and films have all told their versions of what happened before, during and after the gunshots were fired. In Jackie, director Pablo Larrain (with a screenplay by Noah Oppenheim) gives us a new insight into the mind of the woman whose blood-soaked suit haunts American history to this day.

Being First Lady is no simple task. There is no job description and the only way to get it is if your husband happens to be the President. With two small children in tow and in an era when media publicity and televisions were only just becoming commonplace, Jackie Kennedy (Natalie Portman) brought glamour to the White House. She gave a televised tour of “the People’s House” proudly but nervously with the help of White House Social Secretary, Nancy Tuckerman (Greta Gerwig).With the use of plenty of extreme close-ups, we are taken virtually into the mind of the traumatised Jackie, how she not only dealt with the immediate aftermath of her husband’s assassination – in her blood-soaked pink Chanel suit, on Air Force One witnessing the swearing-in of Vice-President Lyndon Johnson (John Carroll Lynch) – but then controlling the image for which the Kennedy legacy would forever be remembered.

The family had barely settled into their home in Washington, D.C. when Jackie, now a widow, is also in need of a new home. With the support of then-Attorney General and brother-in-law Bobby Kennedy (Peter Sarsgaard), Jackie cemented the Kennedy legacy with a funeral procession that showed the world her resilience and gave Americans their own version of royalty – their Camelot.

Larrain cleverly tells the story through a series of flashbacks – Jackie’s early days in the White House, interwoven with the “present” as she plans her husband’s funeral, and flashforwards – her interview with a journalist (Billy Crudup) about a week after the assassination in her Hyannisport home. Jackie Kennedy, the wife of a philanderer and President, was a woman not to be underestimated. And in the end, her fairytale did not have the happy ending everyone wanted.

Jackie is now showing across Australia.

1 thought on “Jackie: The Fairytale Without A Happy Ending”