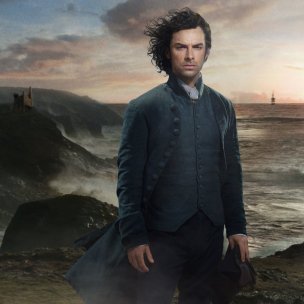 There is no doubt that the BBC’s Poldark series 1 – adapted from Books 1 and 2 of British author Winston Graham’s epic book series – did wonders for tourism in Cornwall when the series premiered in 2015. Cornwall never looked this good when I visited there many years ago. There was a distinct lack of sunshine and, oh, yes, the smouldering good looks of Captain Ross Poldark, aka Irish actor Aidan Turner. Now that filming for Series 3 of this BBC One hit drama is about to begin, perhaps it is time to start planning my next trip to the Cornish seaside on the off-chance I might bump into this good-looking cast.

Series 2 of Poldark – expected to be based on Books 3 and 4 – is about to grace our screens. In case you have not had a chance to binge-watch this beautifully-shot and emotionally-charged drama during the series hiatus, I have done the homework for you and present to you a recap of series 1. (Believe me, having to sit through eight hours of staring at Mr Turner and letting him tear at my heartstrings over and over again is tough work, but someone’s got to do it, right?)It is 1783 and young Ross is at war in America, having enlisted to avoid incarceration for various foolish crimes – gambling, brawling, assault. Even at war, Ross is still brash, though popular amongst his comrades. When his camp is attacked, he is injured and for two years, presumed dead by his family.

When Ross finally returns home, he discovers that his father has died, leaving behind a couple of good-for-nothing life-long servants, Jud (Phil Davis) and Prudie (Beatie Edney), to look after his derelict estate, Nampara. His arrival at Trenwith, his uncle Charles’ (the late Warren Clarke) sprawling estate, to surprise his family, it is he who is most surprised. Interrupting the family during dinner time, Ross is excitedly welcomed home by his cousins Verity (Ruby Bentall) and Francis (Kyle Soller). Uncle Charles appears to be happy that his nephew is alive and Great-Aunt Agatha (Caroline Blakiston), well, it is hard to tell if she is ever happy with her family. 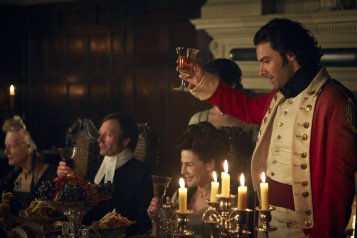 It takes a moment for Ross to notice there are other guests at the table. It is none other than the-girl-he-left-behind, Elizabeth (Heida Reed) and her parents. Things got awkward quickly when it is revealed that the happy gathering is to celebrate the engagement between Francis and Elizabeth. A hastily-arranged wedding follows soon after.

Uncle Charles tells Ross that Cornwall is not the same as when he left it. The price of copper is dropping and Welsh mines are taking away their business. Moreover, his own mine, Grambler, is not producing as much as it once did. He offers Ross money to leave Cornwall and head to London to continue his studies and make a new life. Of course, his ulterior motive is to get Ross as far away as his own son and new daughter-in-law to avoid the potential for him to rock the boat.

Seeing the destitute miners and farmers of his district, many of whom are his childhood friends, Ross sets out to do what he can to help them out. He wants to re-open one of his father’s mines, Wheal Leisure. His friend and banker, Pascoe (Richard Hope), tells him the only way he can raise funds is to find a group of sympathetic investors, which he eventually does.

There are “good” bankers, like Pascoe, and then there are the “money is power” kind of bankers like the Warleggans, George (Jack Farthing) and his uncle Cary (Pip Torrens). George grew up with Francis and Ross, and like everyone else, is envious of Ross’ easy charm and popularity. He sees Ross’ return as an opportunity to win him over and leverage his popularity for their business. Failing that, he aims to destroy the Poldarks and take away everything they have.

On Market Day, Ross tries to sell some of his valuables in order to buy farming supplies. It is there that he breaks up a fight and rescues a runaway girl (and her dog Garrick) who he initially mistakes as a boy. Demelza (Eleanor Tomlinson who is a spitting image of Merida from the animated Disney film, Brave) has run away from her abusive father, Tom (Mark Frost). Instead of sending her back home, Ross takes pity on her and offers her a job as his kitchenmaid, thereafter changing their lives forever.

Read on for Episode 2 recap.